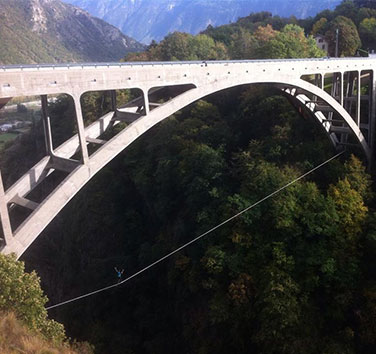 Published in blog, Highline, Projects
by Jonas Konijnenberg
with 1 Comment 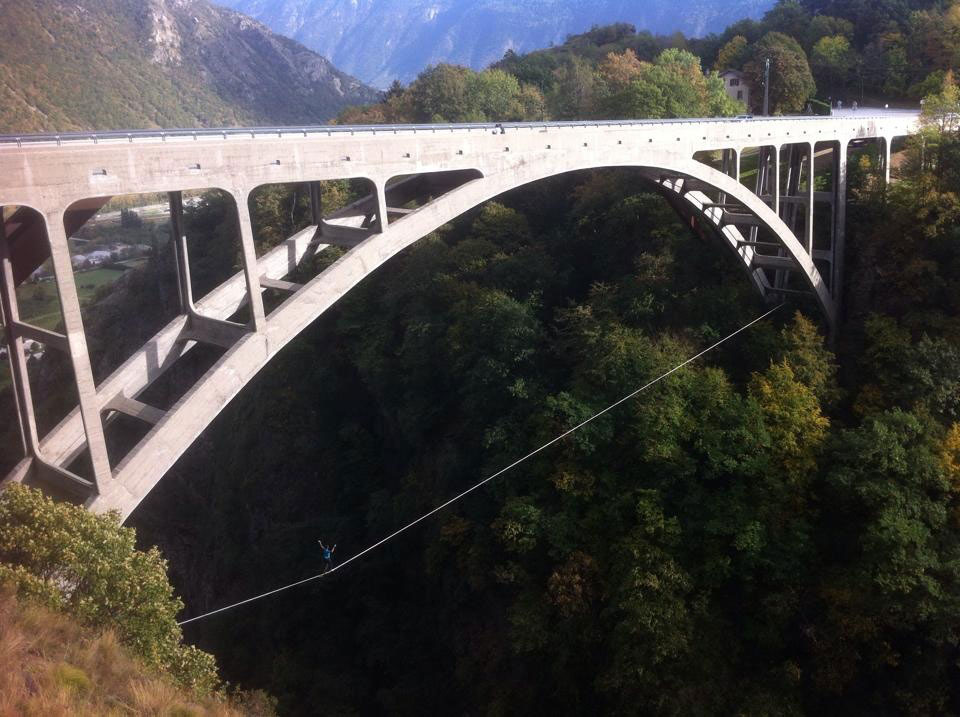 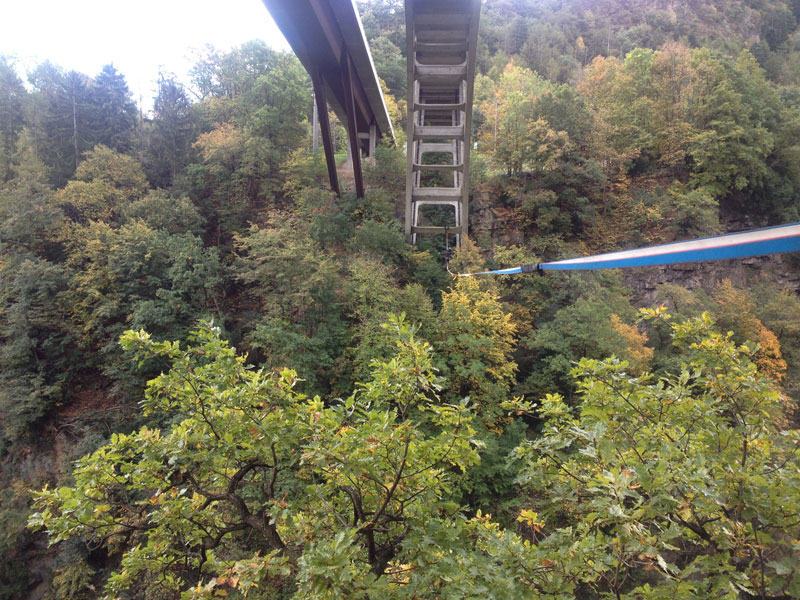 The idea: a line we definitely couldn’t walk, somewhere around the Gueuroz bridge in southern Switzerland. What could be better training?

It’s always strange to drive right up to the spot where you will be highlining, because you normally need to hike for a long time with a heavy backpack. Guillaume, Remy and I got arrived at the bridge by car and went over our plan. We had already discussed that we would try to rig the longest line possible under the bridge, so we used Sam’s 105m Core2LS piece, and laid it out along the bridge, to tape it together with Remy’s Sonic 2.0 and checked the length of our project. 100m. Not a meter shorter. Perfect!

Immediately we started rigging. Everyone knew what to do. That’s the best thing about highlining with experienced people. Everything goes ten times faster! After some fun bridge climbing and mini-rig-ropeswing it was rigged. I had just installed the backup on the far-side and went out to highslide to the other side, where Guillaume, Remy and the leash were, to get ready for some heavy, loose highlining. I clipped in with my HangOver and gave the line a big tug, which shot me forward, out over the abyss. The moment I passed over the relative safety of the trees, a gap of 150m of direct exposure opened beneath me. It was unlike anything I had ever felt before. It definitely did not look this exposed from beside the line! I took a moment to enjoy the view, and then went over to the other side.

Guillaume went out first, and I think he had the same experience as I did. ‘Let’s check my knot once again’, he said, with a nervous smile. Then he stood up, and walked. The line was so calm, as were his movements. He got to the other side and back in no time. It looked incredible! He said it was way easier then he expected and above all… totally sendable! Being a natural skeptic, I went on the line without expecting too much from it. I stood up, and strangely enough, the line was incredibly controllable! I walked until halfway with a few catches , and then to the end without any catches. It WAS possible!

Guillaume was the first one to send it on his fourth crossing. Immediately after him I sent it on my second crossing, and after that Remy also on his fourth. We sat there, staring at the barely tensioned line (50-100kg of tension, at least 2m of sag without anyone on it) in disbelief. Did everyone really just send this line like it was nothing? At that moment the sun broke though (spoiler: corniness on the way) and some autumn leaves drifted past on the wind. Guillaume decided to name the line after this moment ‘Feuilles d’Automne’ which means literally ‘Autumn Leaves’ in English. An unforgettable moment in time. A big thanks to Remy, Guillaume, and Sam for making this all happen (so smoothly)!