Published in blog
by Jonas Konijnenberg
with still no comments 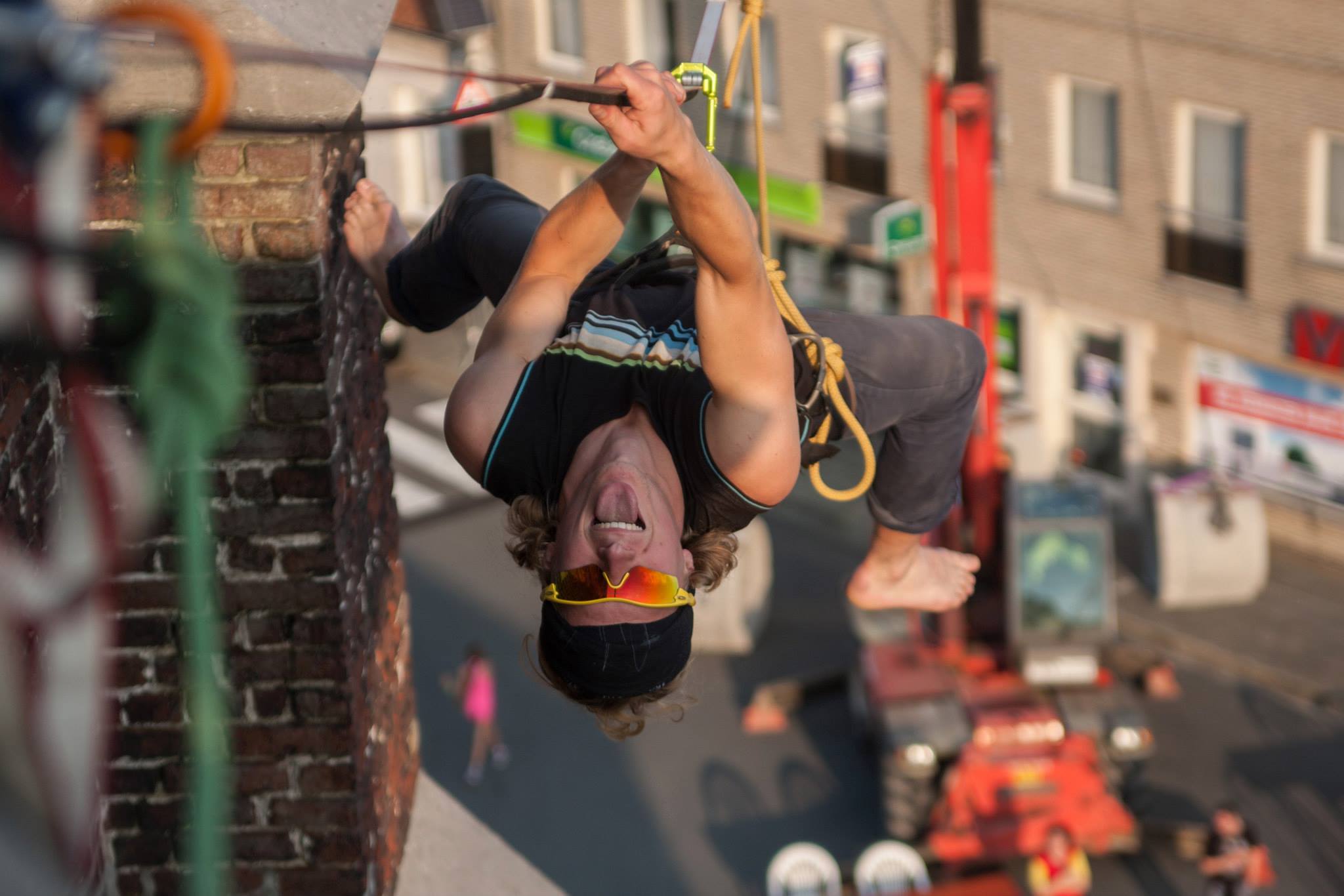 2014 already sounds like a year ago. But my memories are still fresh. Last year a lot of things I’ve achieved which made me proud. I would like to share some of these activities with you.
This video contains a lot of footage from the last year. For the story behind the movie; read the following stories:

After 2 years of lobbying and attempts to take slacklining indoor in Amsterdam, finally I’ve got my own group of slackline ‘students’. I learned them to slackline, but more important I showed them how to play. The lessons are still going on and they rock! 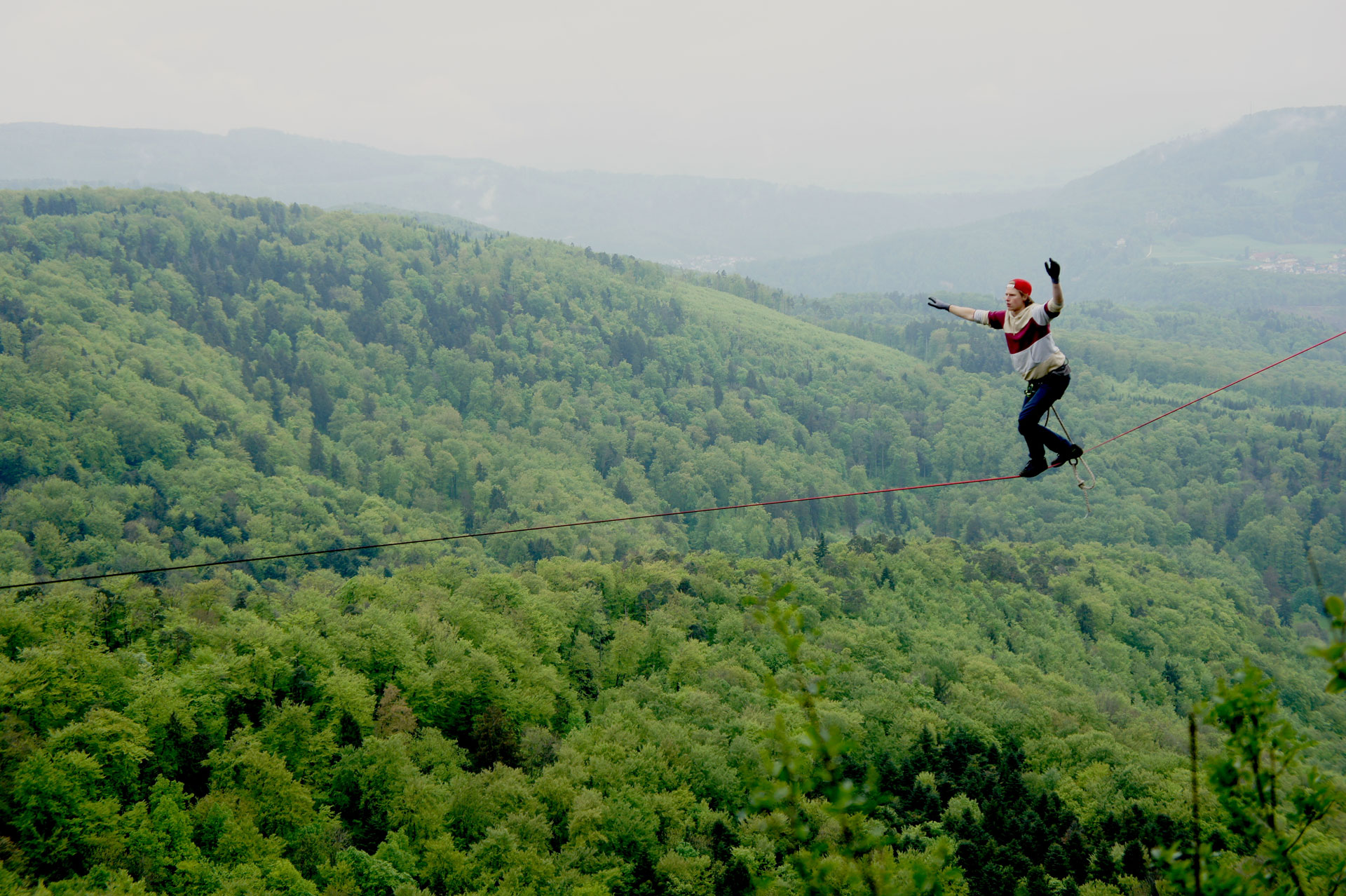 Pushing my limits on long- and highlines

In 2014 I started practising longline more and more. After a couple of sessions I broke the 100m barrier. I felt super stoked after this step and kept on training on double lines and heavy webbings. Let’s see what 2015 will bring me for nice lengths 🙂
The highlines longer than 40m were still quite a challenge, but during the end of the summer everything underneath this length I onsighted 🙂 In 2015 I definetely want to break the 50m barrier.

Ooh, a real dream came true in 2014. We, as Dreamwalkers, did some four really nice highline shows.
The first show I did was the Holland’s got talent highline. Big spotlights, a blown up circus and hilarious comments; it was a good experience, but still I prefer nature for highlines 😉
Mundial festival was the first show were we acted as team Dreamwalkers. The perfect hall for a show, with two highlines set we were able to show everyone one the festival what our passion is. Later the hall became our training location. 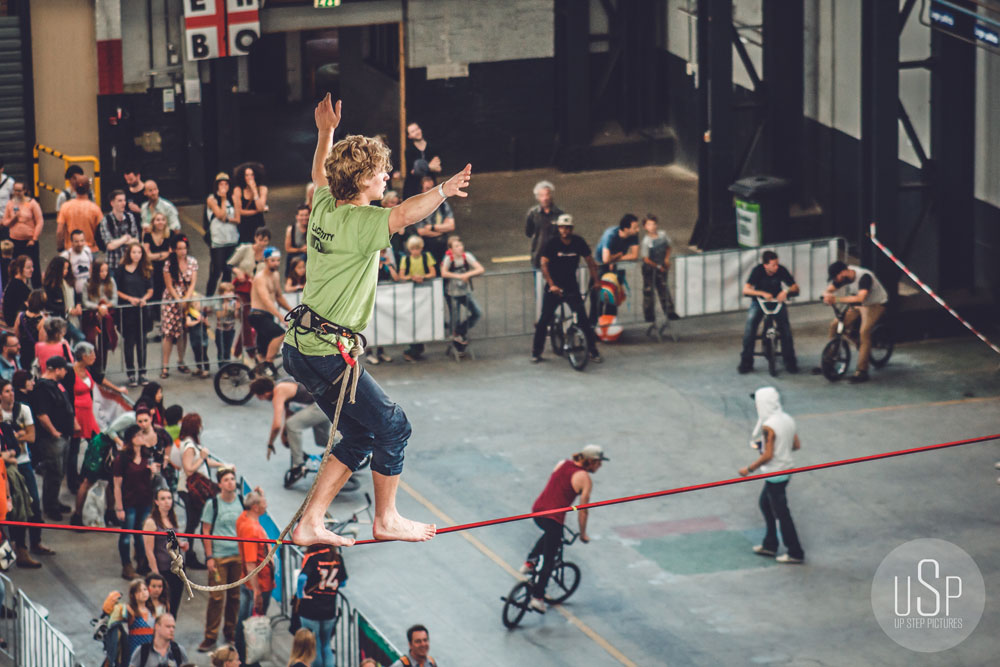 Moen was out biggest show so far. We built a highline from a crane to the church. Super scary, because the crane was constantly moving. But, walking towards the crane gave you a beautifull look over the city! 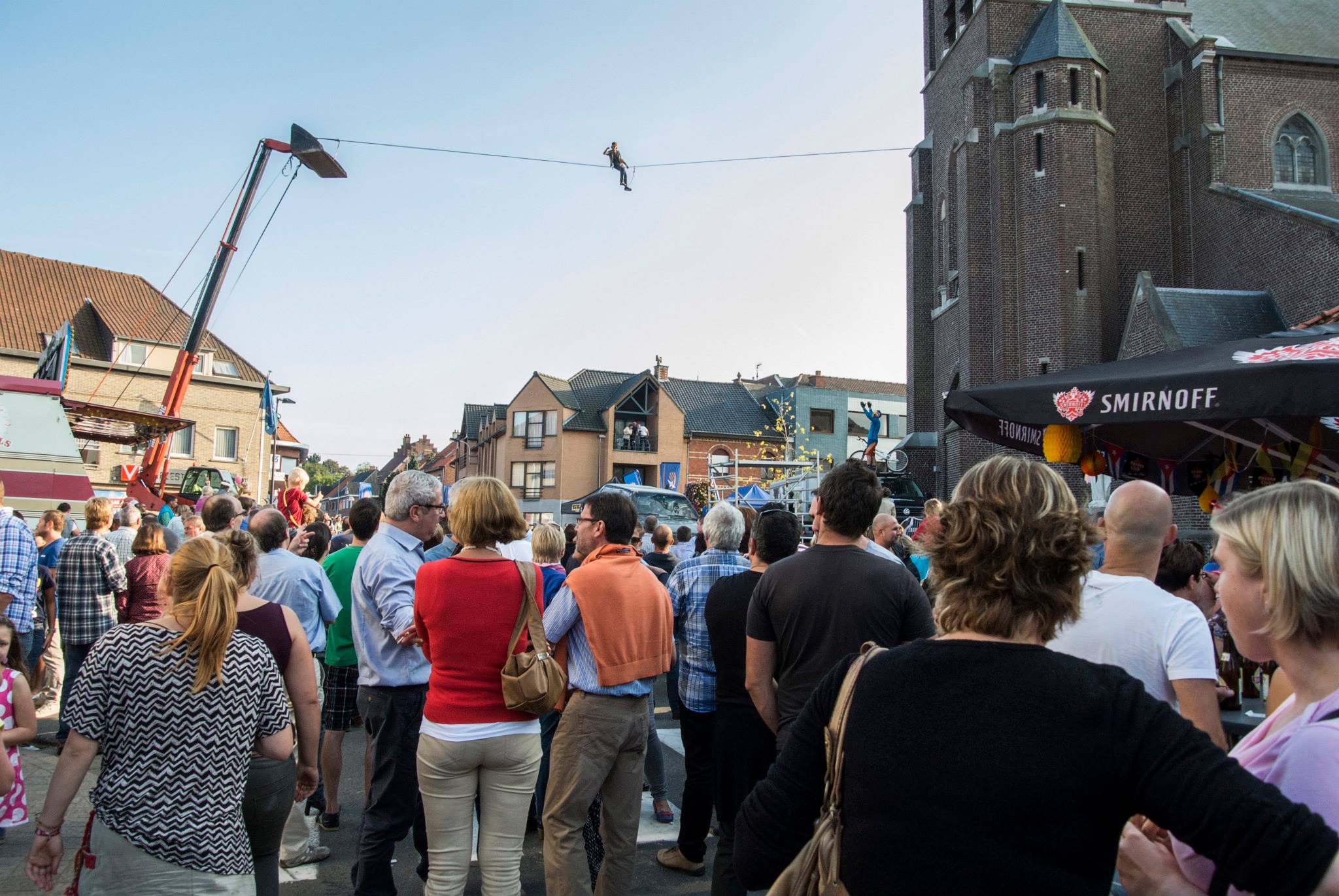 The last show of the year was in a climbing show, during the National Champioships lead climbing. We had fun during the day together as a team, during the evening we performed and had even more fun! It was nice to show these climbers our outdoor activity, as they understood the difficulty.
The show was super strong; when someone was ready with his short act on the line, the next one started immediately as we had two leashes.

In August I organized as Slacktivity a jumpline contest during Antwerp Street Kicks. Street Kicks is an event for extreme sports in the city of Antwerp. During the contest there were constantly 200-300 people looking at the slackline. The slackline had a perfect length; around 21 m and a real nice winner; Floris Verbiest. He showed us his talent on the slackline, I am curious what he will throw down in 2015… Double buttflips?
It made me happy to give starting slackliners a podium to show their tricks to an audience.

We organized the first national indoor slackline jam in the Netherlands. We gave some workshops in highline skills, like leash climbing and line-ups. In total there were around 90 persons. The day gave me the perfect mood; I was so relaxed because everyone was having fun. No stress at all!

Thanks for reading! In case you’re interested in my last year’s video…

So, a couple of months ago my girlfriend encouraged me to participate in Holland’s got Talent. I wasn’t so motivated in the beginning, but it seemed like a nice challenge after some previous experiences with television and demonstrations. First, it was my plan to make a trickline show, as tricklining is much more spectacular for people who are not familiar with the difficulty of a highline.A couple of days before the recordings of the show the HGT staff called and informed me that they had a perfect highline possibility inside the theatre, above the audience and judges. A highline show is a bit of a risk when it comes to creating a successful show, but it was the ultimate challenge to see if my nerves would hold in front of an audience and 10 cameras!My show was planned in the afternoon around dinner time. Tom Peek and Cor Vinke helped me with rigging the highline in the theatre. We only had 1 hour to rig and test the highline. On both sides we had to fix a rappel to get to the anchor points, which is difficult.
It was super stressful to rig the line, because there was a super thin area where the slings had to fit through. After 50 minutes we managed to complete the setup. I leashed in and took some steps. In the middle I had to test with a big leash fall to check that it was at a safe height. I had some tries and began to enjoy the line. The location was perfect, an indoor theatre highline! I never thought this would be possible, a dream come true :)Right at the moment when I wanted to take a rest, the head chief of the show wanted a final rehearsal. I already was totally sweaty because of the spotlights that were all pointing at me. But it was a good idea to make a full test run. During the test run I found out that the startup should be a bit faster, I also found out on which spot I had to make my tricks to be perfectly positioned above the judges. People were waiting to get into the theatre, so we had a short rest and prepared for the real show.
The show started with an introduction of myself and my act on stage. Judges were astonished about the idea that I was planning to walk over the slackline. I went up to the balcony, rapelled down and leashed in. The music started and my act had begun! Walking with the whole crowed and in front of a lot of cameras was challenging, falling was not an option because that would be the end of my act….. But I really liked the idea that everyone was watching me while I was having fun on a highline! So I stayed quite calm and made it easily to the spot were I planned to do static tricks. All my statics went pretty good and I heard that my two minutes of show were almost to an end. I rushed to go hanging on my toes above Gordon, one of the judges. The music stopped and I dropped myself from my toes into my leash. I heard some small screams from the audience and realised I brought my act to an good end!The judges were a bit critical, as they couldn’t understand the difficulty of a highline, but they seemed to like me and so I made it to the next round! 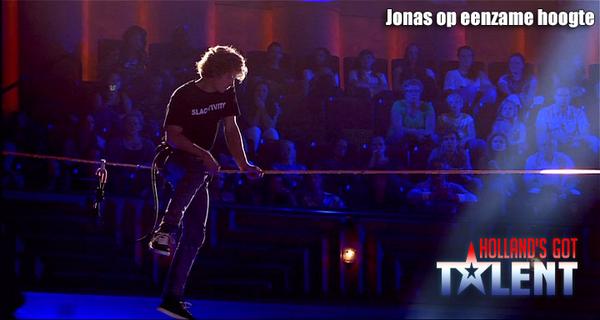 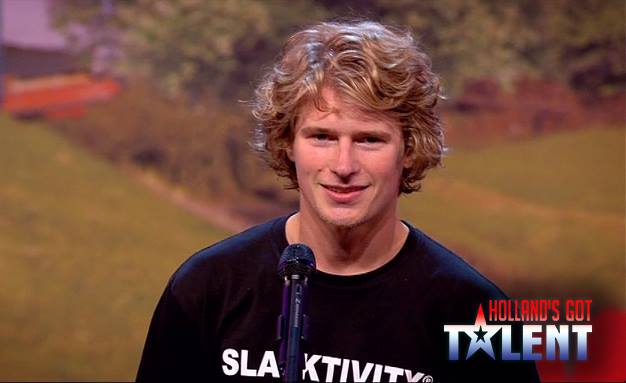