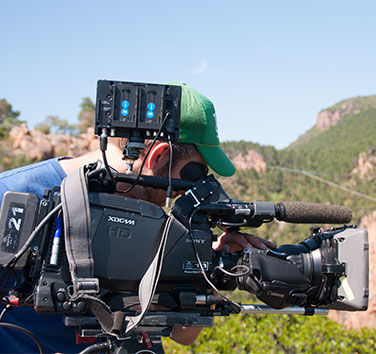 Published in Highline, Press, Projects, Shows
by Jonas Konijnenberg
with still no comments
In May 2015 we were asked by a Dutch TV produce house to set a ropeswing for a short item about a girl. Her dream was to do once a ropeswing and walk a highline. As we had experience with both, they decided that we were allowed to fix the ropeswing and highline for her. This means that we had our first job where we were asked to fix something for someone else! The ropeswing wasn’t meant for us, but of course for the girl. This was one of our first opportunities to make a real dream become reality 🙂 The show is called “De tijd van je leven”, which means: the time of your life.

Finally. We arrived at the spot at about 10 in the morning on the first day. Dropping off 125kg of gear at a newly agreed meeting point after which we went looking for the anchors. Three days of rigging, testing and derigging in the 32 degree sun were ahead of us, and we were stoked.
Quickly we found the anchors of the short highline and the ropeswing highline. The short highline was 28 meters long and easy to rig. The ropeswing highline was about 85 meters long, and 15 meters (!) off leveled. Quite bit harder to rig and the most important line, so we started on that one.
Everything went smoothly and we established the big line in about 5 hours, after which we took a small break in the shade to cool off and energize ourselves to rig the smaller line. We didn’t rig the ropeswing on the 85m line yet, because we were pretty sure we had enough time to give the big line a try the next morning. Also the small line was done within no-time (except for a little throwline-error ;)), and at around 18:00 we went back to the hotel after a successful day of rigging. Tomorrow walking time! 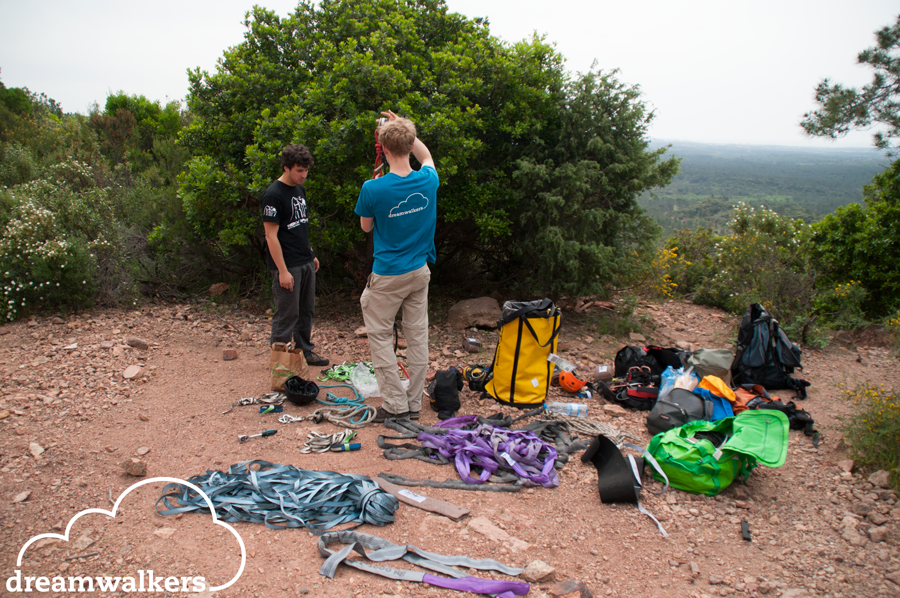 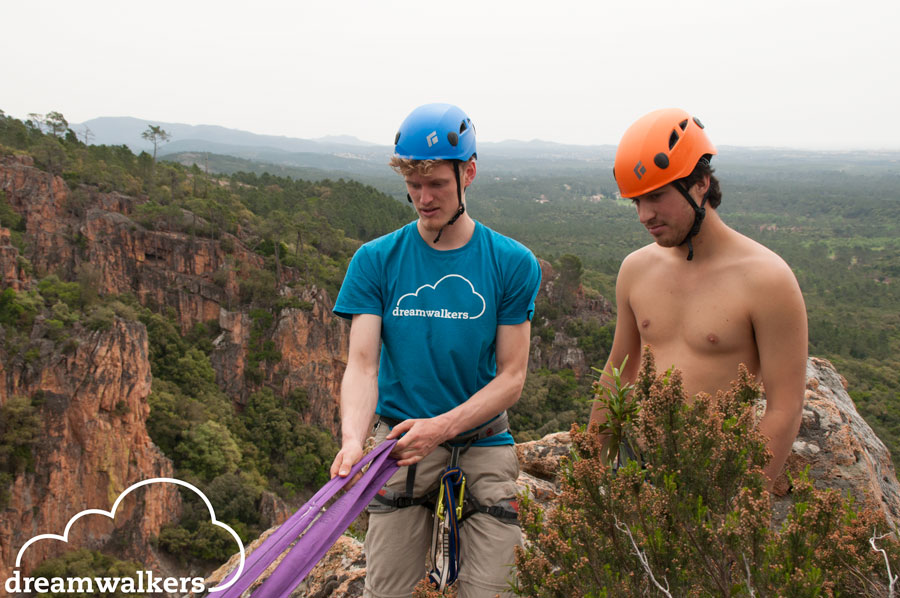 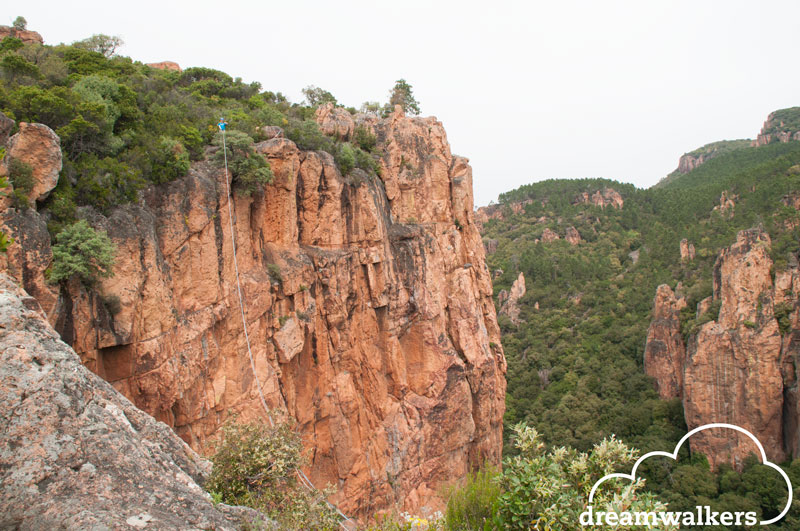 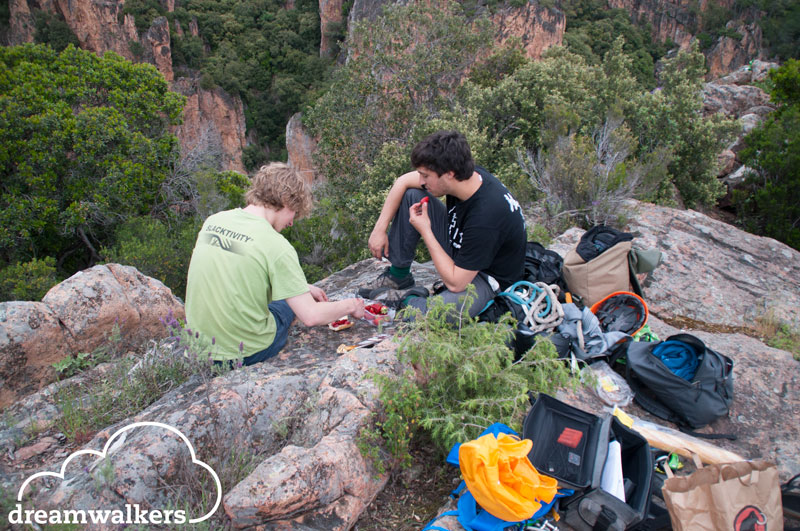 I sat on the lower part of the big line. It was a weird experience, being in the beginning of a line, and bending your neck just to see the anchor. As soon as I stood up my eyes went straight ahead and I just focused on the line. After a couple of steps I fell. Back into chongo, and.. Wow, the line was already going up! Chongo would get harder and harder! Just don’t fall smile-emoticon
At about half the line I fell again. Chongo was hard, but still doable. Reaching the end was a weird experience. It was so steep, that I almost slipped backwards. Since the line wasn’t very tensioned yet, it was about to hit the rocks, so I just went down. After some bouncy fun in the middle, we decided it was time to rig the ropeswing. We would still have to test it, and the next day was d-day!
I went to the middle of the line to do some improvisatory rigging. With some prussiks and tape to keep everything in place it was all fixed and ready to go. I brought the ropes back to the side, Jonas made an 80kg haulbag full of stones ready to be thrown off the cliff, and then it was time. The first test. Tom and I were keeping an eye on the anchors, which I tried to blindly film the fall of the haulbag.
“3… 2… 1… Komt ‘ie!”. The haulbag fell, and… There was barely any sound. The anchors didn’t move an inch, and the haulbag was slowly swinging 35 meters below the line. Success! Getting the haulbag back up took us quite a lot of time, considering it doesn’t have any arms to keep the ropes from twisting. Therefore it was already late when we got everything ready for the next jump, so we decided to let only Jonas jump the next day before Karen would be the lucky one. 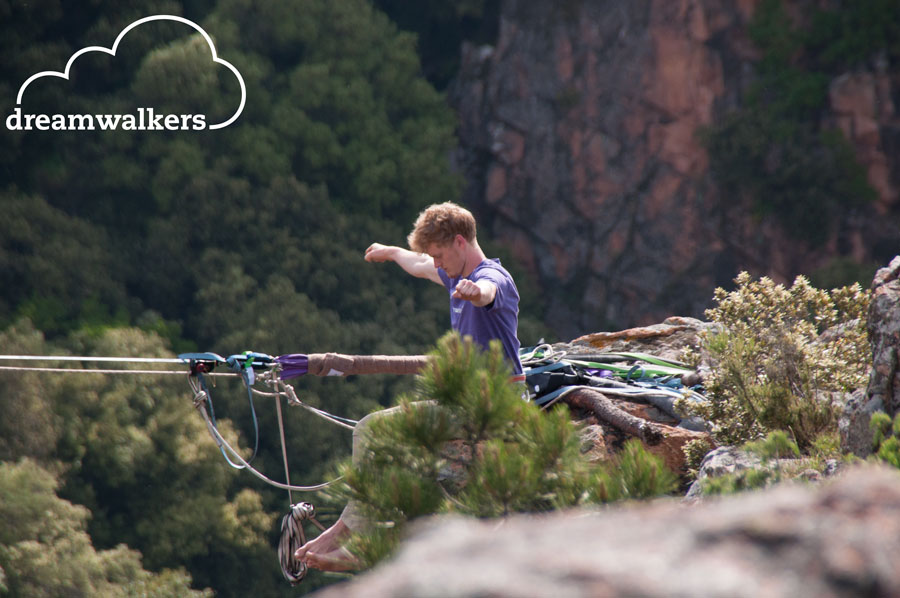 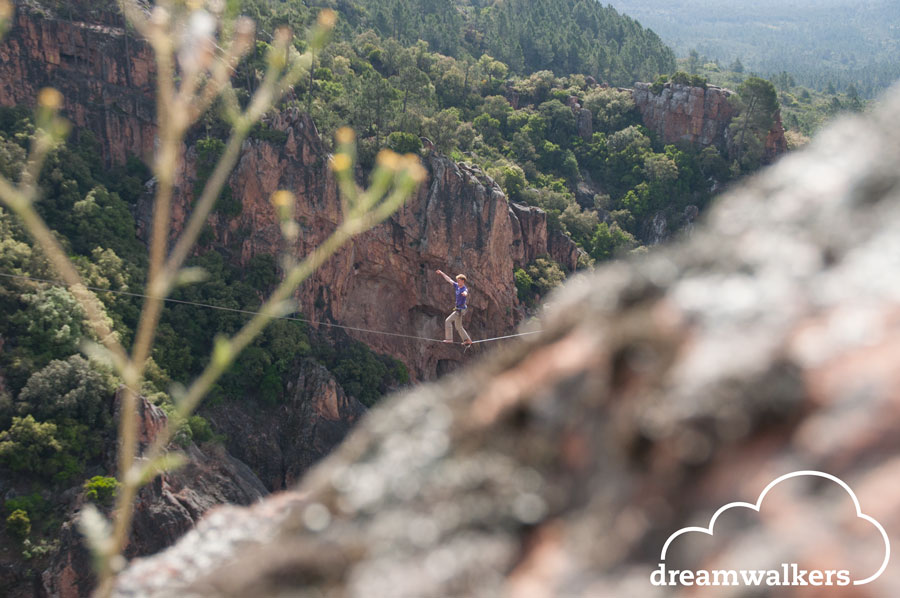 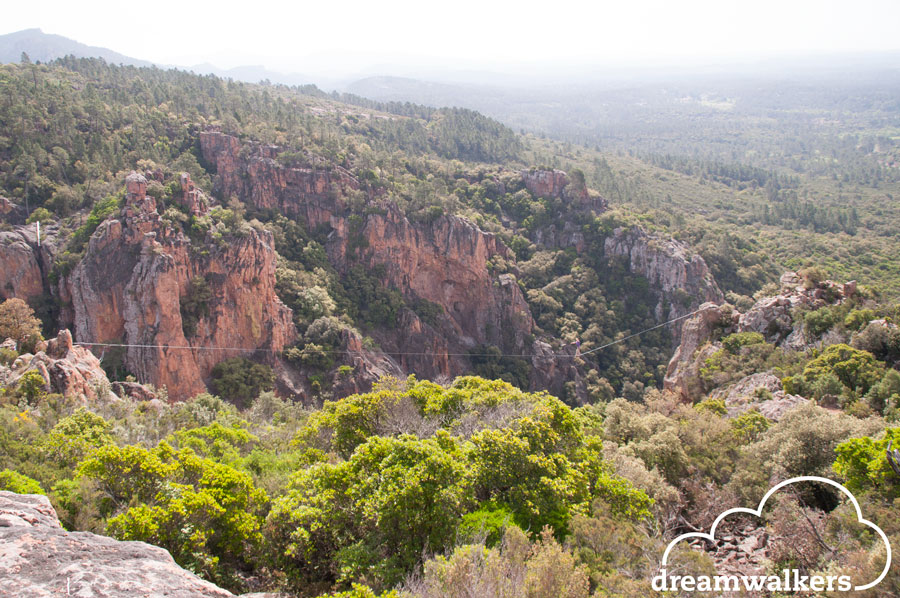 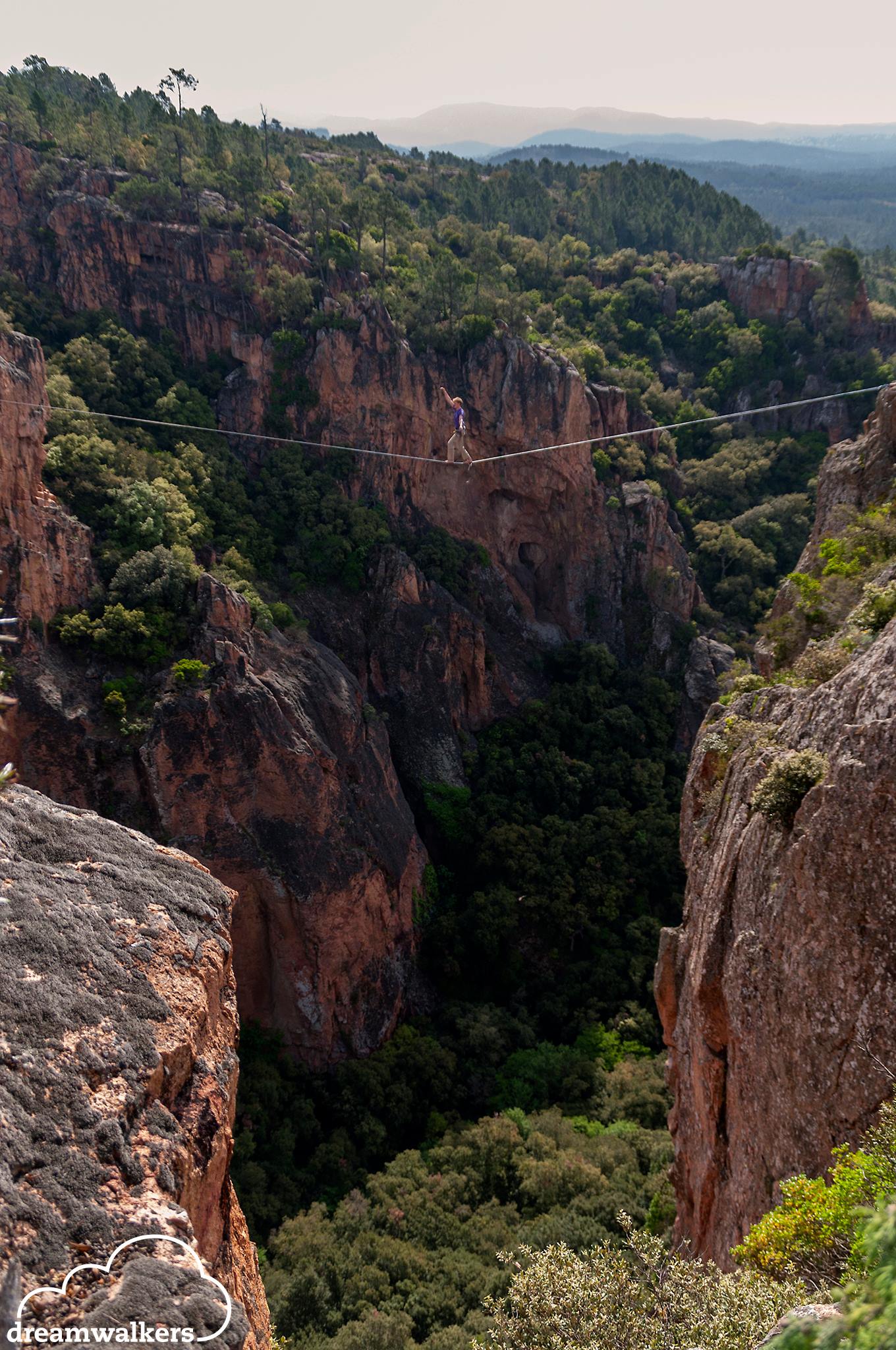 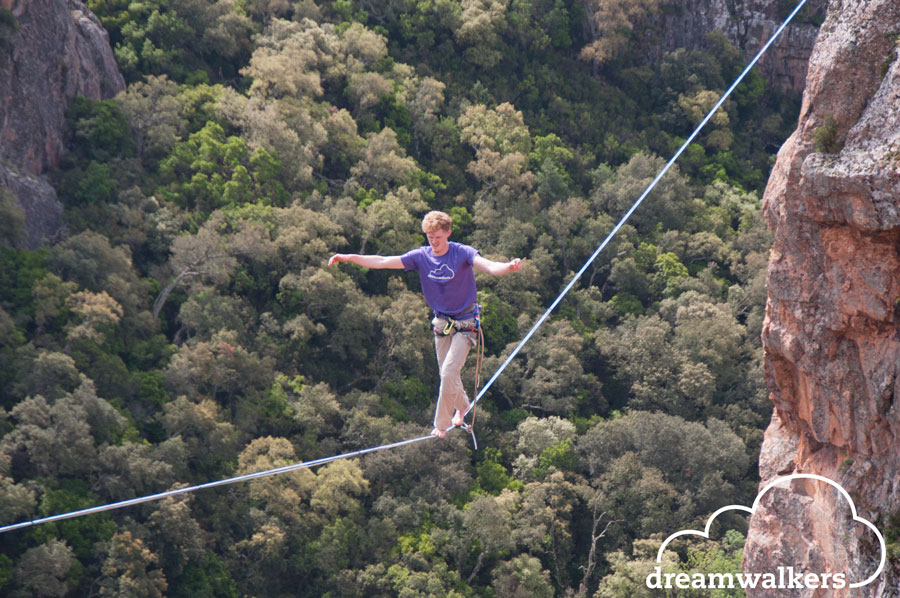 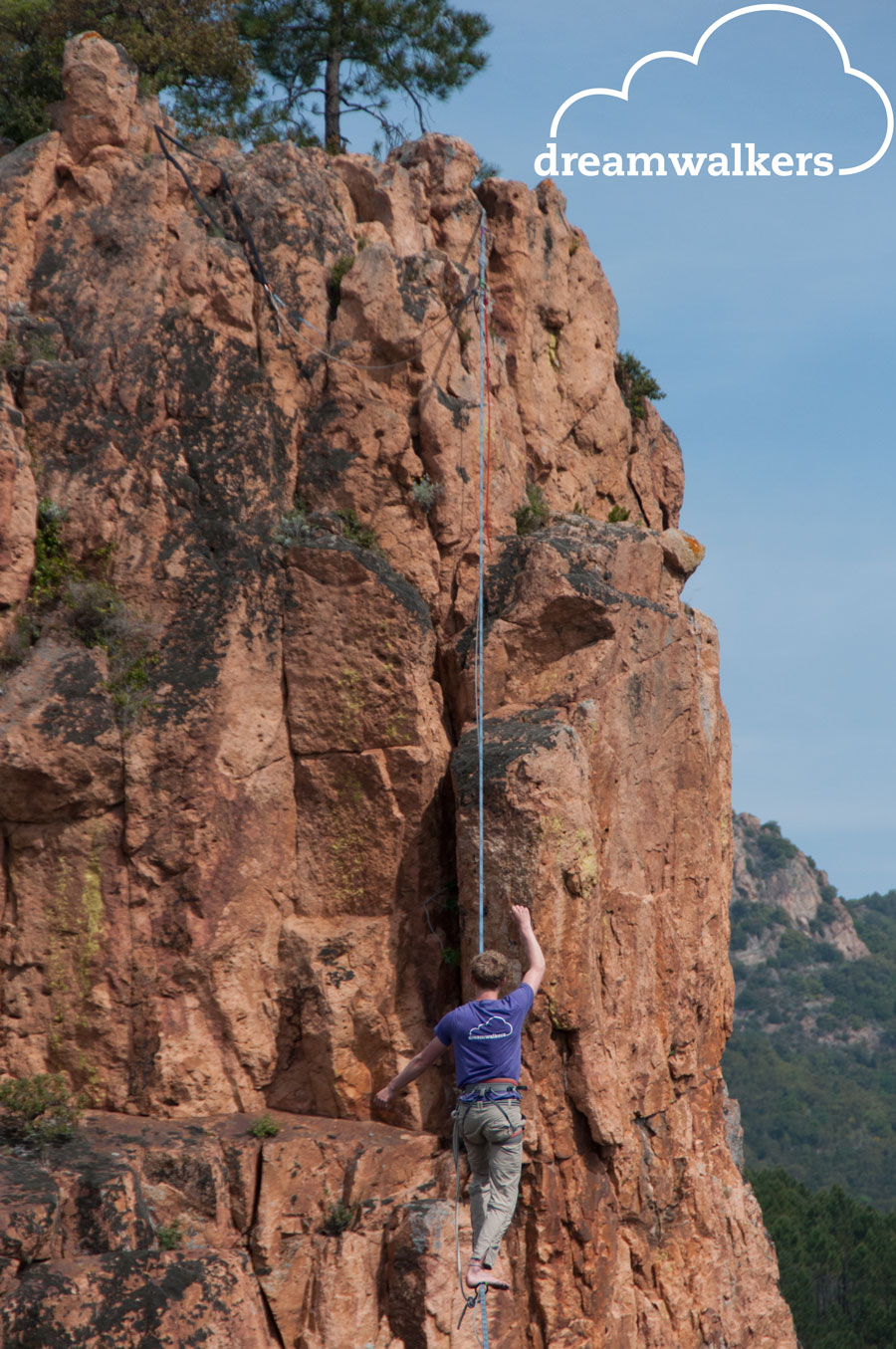 We went to the lines at 9:30 in the morning on the last day to do some final checks before the filmcrew arrived. Everything was ready. Even though everything was 200% safe and thought through, we were still a bit nervous. But… Better nervous than careless!
At 11:30 the filmcrew arrived and the show got started. After some funny fake “meetings” it was time to get started. Jonas would jump first. I was by his side, encouraging him. 3, 2, 1, JUMP!!! Without any doubt he threw himself in the abyss. A few seconds later; a dull sound of the ropes catching him as smoothly as possible. A few high pitched man screams later, Tom and I were hauling him back up, and after arriving back to the middle of the line, he pulled himself to safety. Then the moment we’ve been waiting for. Karen was going to jump!
Tom was waiting at the top anchor to go on the line to get Karen off, Jonas at the bottom to pull her up, and me by her side, tieing her into the ropes. The ropes were ready, the filmcrew was ready, and Karen was ready. We would do a countdown from five, she was sure about jumping, and not even breaking a sweat. 5, 4, 3, 2, 1, JUMP!!!
And there she went. No hesitation. Fully trusting our judgment. 30 minutes later we got her back on the side, and after some necessary ‘reaction filming’ it was done. Everything went so smoothly!
No more highline for Karen, since they had to go to the airport to catch their flight. We said our goodbyes, as soon as the TV crew left we hugged each other and we were so proud of ourselfs.
Three days of hard work all came together in that one, single jump. All the preparations were totally worth it, as everything in the Jump of Karen went without problems. We were also really happy with the fact that we made a real dream come true; Karen had an awesome experience with the ropeswing and we had made this possible 🙂 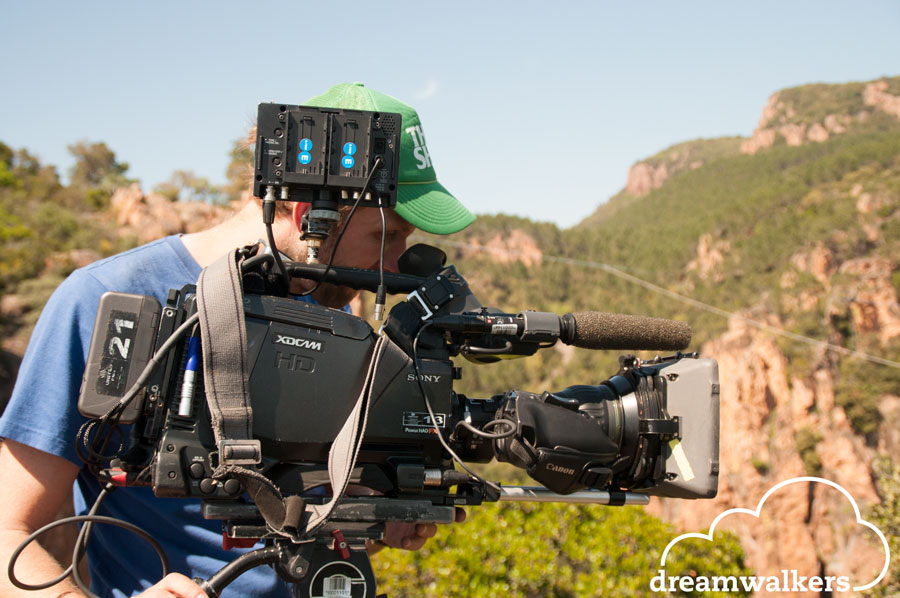 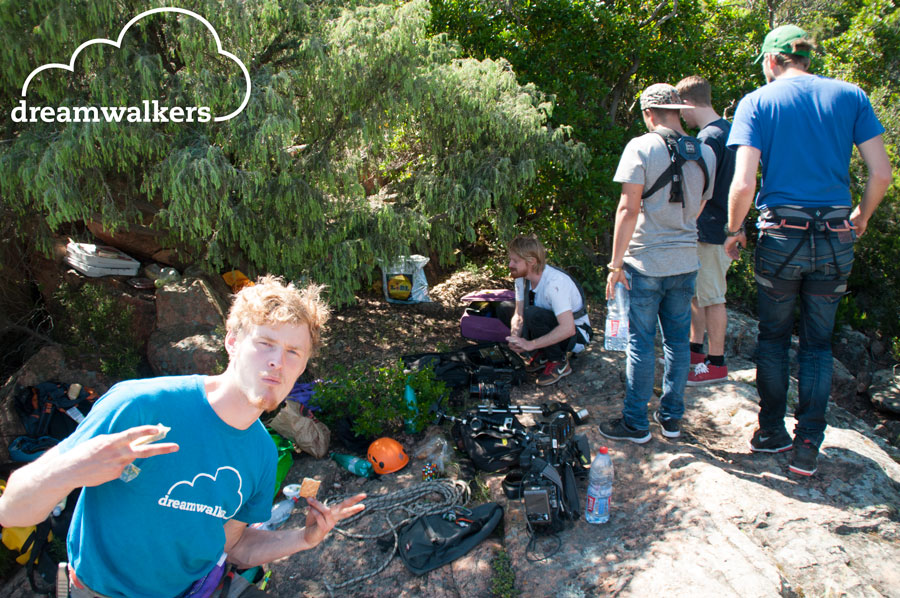 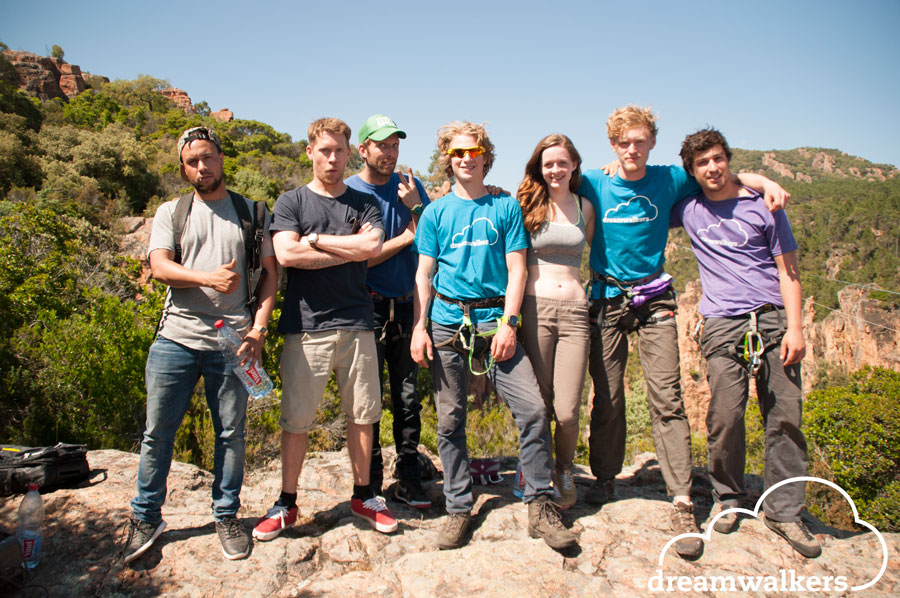 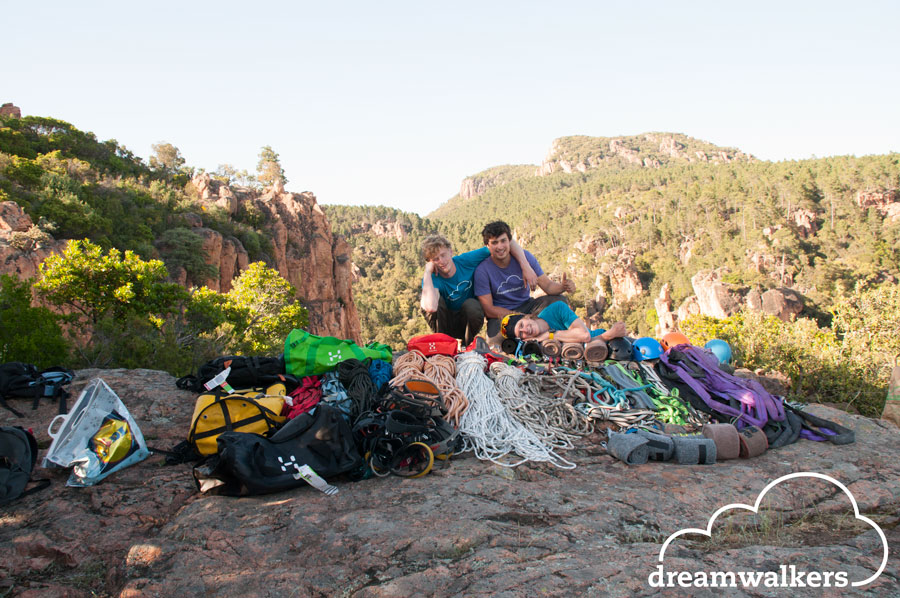 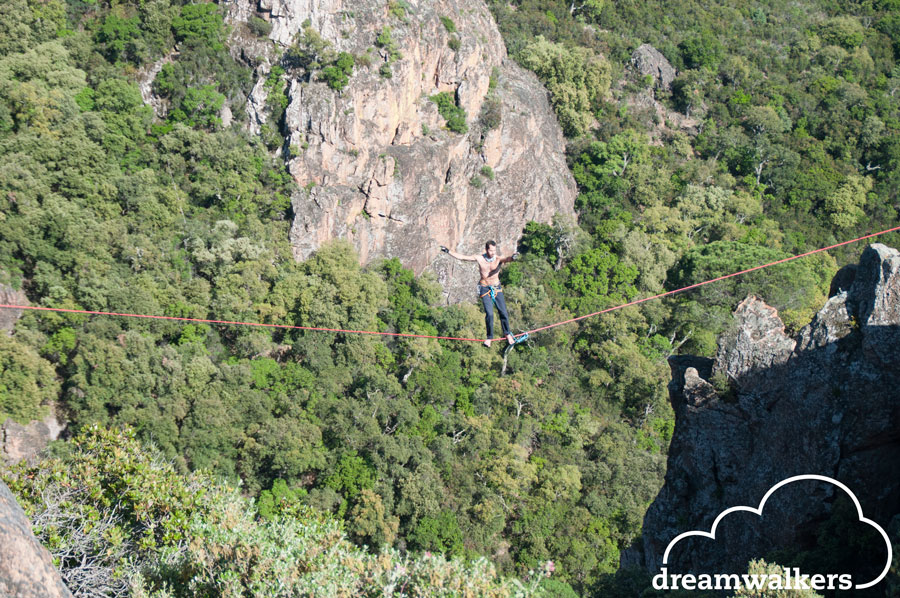 We started derigging. I looked on my phone and… A message from our good friend Guillaume: “I’ll see you in 5 minutes!”. And there he was, 5 minutes later! After all the small highline wasn’t rigged for nothing. He went to have a quick session on it while we derigged the big line, and after that also the small line. 125Kg of gear back in all the backpacks, and we were ready to go home!
PS: Thanks Guillaume for all the great work you did in getting permission for us and finding the spot!

We expect the video of the programm soon to be published. For now we just have the session video of Yuri! 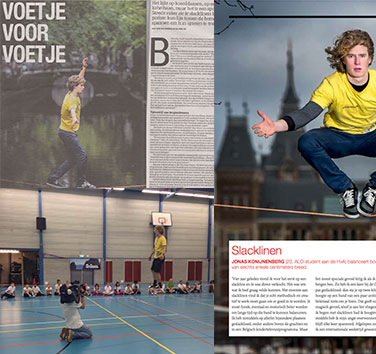 Published in blog, Press
by Jonas Konijnenberg
with still no comments 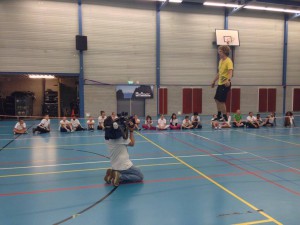 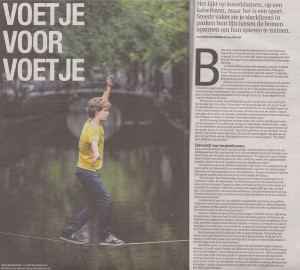 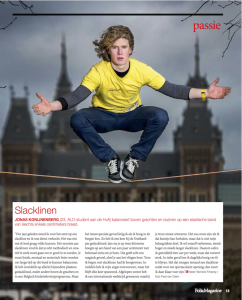 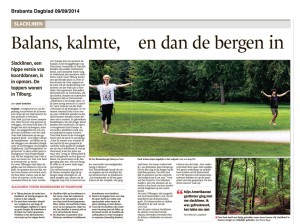 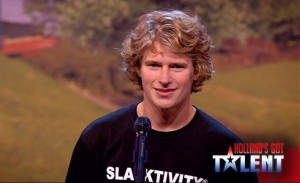