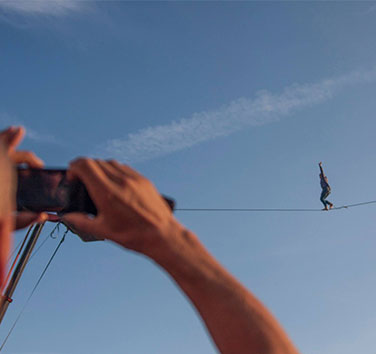 On the weekend of 21 & 22 september the Dream Walkers gave a highline show in Moen, Belgium. Kenny Belaey and Viki Gomez (both World Champion Trial bike/flatland BMX) Text underneath by David. Video by Jonas

Travel, friends, adventure. All the right ingredients for an epic weekend. The whole Dream Walkers team had a highline show in Moen, Belgium. Church plus crane is some highline maths we love! So, I got up at 6am on Saturday morning, drove from Rotterdam to Tilburg to pick up Yuri and meet Tom and Jonas. Also, to go over gear one last time and drive down to Belgium together, in a little team convoy. Highline time!

Two hours later we arrived at Moen in Belgium, in good spirits. We greeted the festival organisers and went directly up into the church. Going into a bell tower was something I had always wanted to do, so quite exciting to see the old wood and bells. However, a few hours later, during the rigging, when the bells rang for a wedding, deafening us, my enthusiasm faded somewhat…

After looking around and checking the structural rigging points, we brought up all the gear, pre-taped the lines, slung beams with slings and padded all the points where any rubbing would or could occur. Rigging is a really fun process, bringing all the team together, all working out the best way to do things, many, many jokes and laughs. If only I could repeat some of the jokes here…

Basic rigging completed, Tom and Yuri went down to the crane, supervised the final positioning and height coordinating of the crane with Jonas and I. Really great fun to be in charge of a big machine. They also arranged for the placement of three, 1t concrete blocks, to provide anchoring for the crane and suitable backup to stop it from wobbling.

After everything was setup, we doubled checked the rigging, double-checked each point and made sure everything was padded and safe. This is a very important step, to make sure that everything is safe and that we have not missed anything. Then we tested out the setup, with a walk. Handily, there were about 400 people running around the village dressed as devils, so a nice crowd. Of course, it was a nice contrast to walk towards the church and have devils running around underneath. We practiced our routine, got the feeling for the line and enjoyed the view.
So amazing, to look out over the village, from such a unique viewpoint and to be able to highline from there. Well, these are the unique moments in life you will always remember, shared with friends. It is for these moments that we love highlining

As it was getting dark, we decided to head to the hotel. The organisers had booked us a hotel room just outside Moen, which was simply amazing. Normally, when we are highlining, we are camping or sleeping somewhere not particularly comfortable. In Moen, we had a huge hot shower, beds and the next morning a huge buffet breakfast. Such a great team experience and great preparation for the show.

Sunday morning, waking up after a great sleep. We arrived back in Moen and straight away double checked every point of the rigging, checked the line, double-checked all possible abrasion points. Safety is our number one concern and we only rig and walk safe lines. Our life is on the line, after all.

We then met Kenny Belaey and Viki Gomez, which was inspirational. They make a living from pursuing their passion, pushing the limits in their sports. They travel the world, competing and showing their skills to thousands and thousands of people each year.
Kenny Belay is a world champion trial biker, he uses a modified mountain bike to hop and jump over all kinds of obstacles and it is amazing to see him perform.
Viki Gomez competes with the world’s best, in BMX flatlands, which is using a modified BMX to do many amazing tricks like riding a BMX like a unicycle , front wheel monos, backwards and more.
We went to lunch with them and they are super relaxed and very friendly. It is quite interesting to talk with people who are successfully pursuing their dreams. I am looking forward to the next time we can work together.

Tom and Jonas opened the show with an amazing trickline performance which really wowed the audience. They really engaged with the audience, got people lying under lines whilst doing tricks over the top and getting the crowd pumped for the Kenny and Viki’s shows. I think that no one there had ever seen slacklining before and to see a few guys who had been doing it for years giving the a top show was a perfect introduction.

All of a sudden, our highline show time arrived! The show plan was us walking and performing for two to three minutes and then Kenny and Viki performing, then us again. Really fast changes and no wasted time at! I was tied in, when suddenly I heard my name being announced over the speakers, by the MC, Denis Herman.
Time to go! I got out, got the start cheering and before I attempted to stand. I was quite nervous, with every one watching. So, I tried to stand up….. and made it! Feeling really great now, I walked out to the middle, balanced on one leg, then danced a little on the line in time to the music, having a lot of fun. I ended up doing a short exposure turn, sat on the line thanked the crowd and slid back to the start, using a Hangover (a line slide to helo you move fast along the slackline)
Then Tom headed out onto the line, showing the crowd how easily it can be to walk the line, showing great control. He didn’t have more time, so he calmly sat down on the line, 15m over the trial bike course, and clipped in, sliding back with a smile on his face!
Jonas followed up, with a show all about interacting with the audience. He had three paper airplanes which he threw down to the audience, hung upside down and showed the crowd his gymnastic abilities.
Yuri closed the show, with a spectacular blindfolded walk. He walked really calmly to the end and sat down, no shaking at all, a solid walk! Ending up with a one arm hang, he clipped in and slid back, a great end to a great show.

It was a marvelous show, we all had a lot of fun putting on a show for Moen! It is nice feeling giving so many people smiles. We aim to inspire people into pushing themselves and doing amazing things. We are already busy planning the next event and hope to get more people interested in highlining and slacklining! 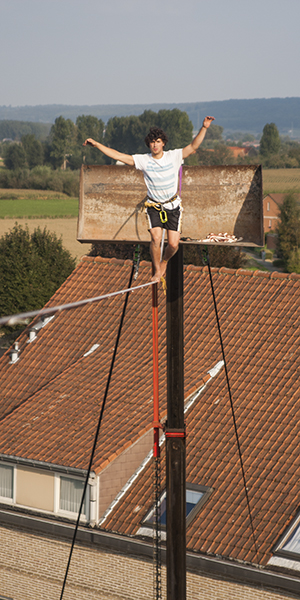 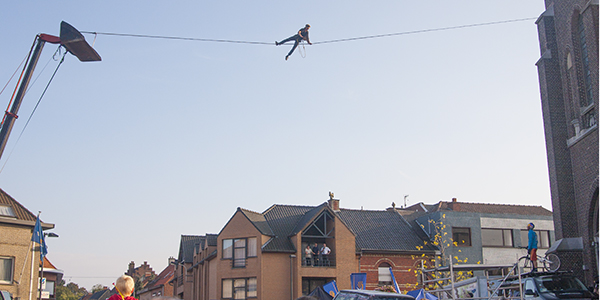 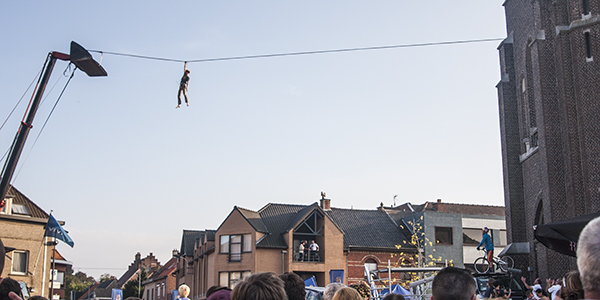