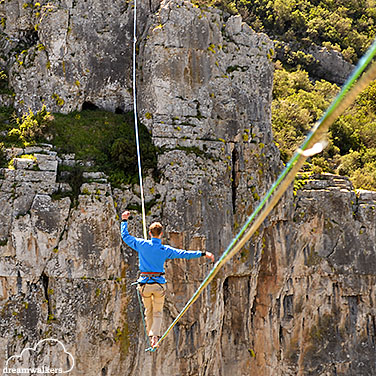 Published in blog, Highline, Projects
by Jonas Konijnenberg
with still no comments

Written by Yuri, photos by Can Sahin

In a small car crammed with camping gear, two heavy weight highline rigs and space for 2 people. There were five of us. Things got interesting. Real interesting. Pretty much a masterclass in Tetris multiplied by Twister. We wound our way out of Istanbul at 10pm to camp at the highline spot. The best thing about arriving at midnight is that the beauty of the rocks and landscape will refreshingly welcome you the next morning when you wake up after a great night of sleep. The morning sun painted the rocks and landscape, filling in the blanks left by descriptions and photos I had already seen. 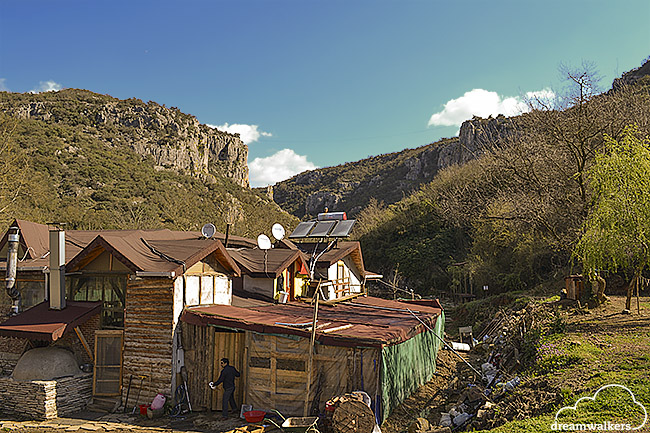 This is the beautiful gap that Can had so excitingly told me about. It would be approximately 135 meters he said, and we would rig it with dragon and 10,5mm rope backup. During breakfast I couldn’t keep my eyes off the gap, while the others were slowly preparing. I was ready. I was excited. Too excited! STOKE!!! 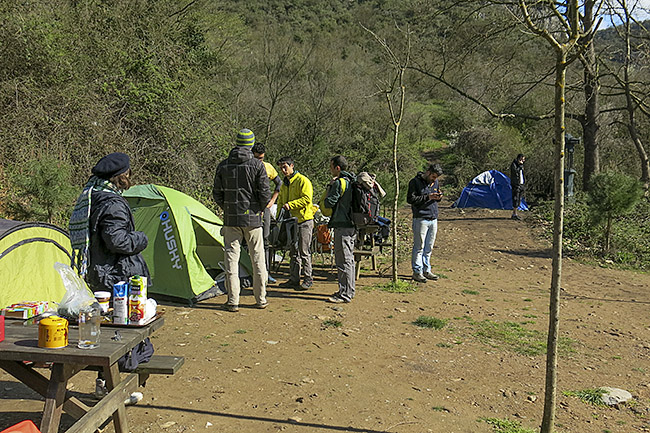 We brought the webbing (ever so kindly sponsored by our friend Sinan!) in between the two rock faces, Nuri and I walked up on one side, made the anchor (all natural) threw a rope down and attatched the first end of the webbing. Then Can bravely walked the webbing to the other side of the river (while keeping it dry!!) and we did the same for the other side. Everything went flawlessly (except for forgetting to put the leash on the line. Standard practice) and we were done rigging within 3,5 hours! It was time for some lunch, to get ready for some long heavy goodness! 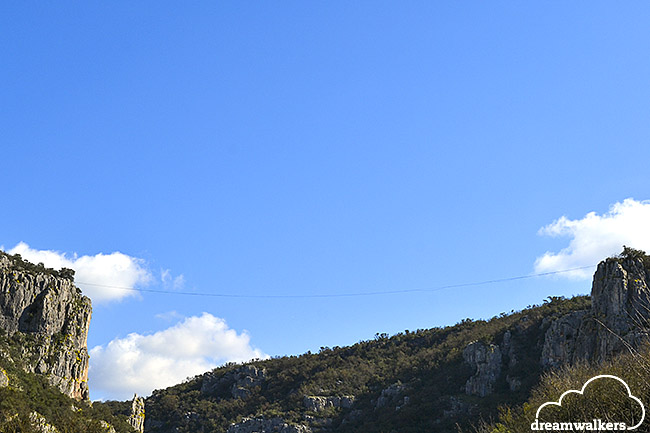 We knew the wind would make it pretty hard, but didn’t expect the how much and powerfully the gusts would vary. I got up on the beginning of the line and a gust blew the line 5 meters sideways. I stood up, put a few steps, and the wind stopped for a moment. The line went all the way back and I lost my focus. I caught. This happened a few times and I also tried in the middle. I couldn’t hear anything around me except for rapidly blowing wind. It was a hugely powerful feeling. I slid to the other side and back to get some protection off the line that was necessary during the rigging (thanks for your sweater Nuri 🙂 ) and was drained. Tomorrow I will try again… 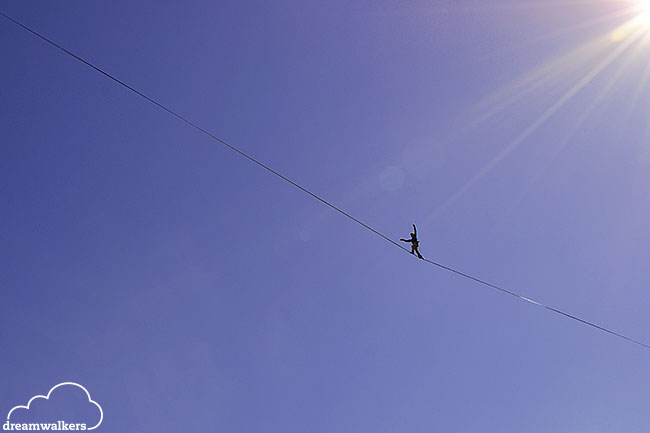 When I got on the line the next day, I quickly noticed that it was saggier than yesterday and rather unleveled (later we found out the base camp-side was about 5m higher). Combined with the sag, and brand new dragon webbing the first 20 meters felt really strange. My shakes didn’t really reach the end due to the sag, but every step felt like I missed a step on some stairs. It was a lot lower than I was used to. I walked the first 20 meters on my first try, and got across with a few catches. This was the same for the way back. The incline and slipperiness were both pretty severe, so the last 5 meters I kind of had to shove my feet forward instead of actually walking. So far it went well! I made three more crossings and called it a day. Tomorrow I will try again… 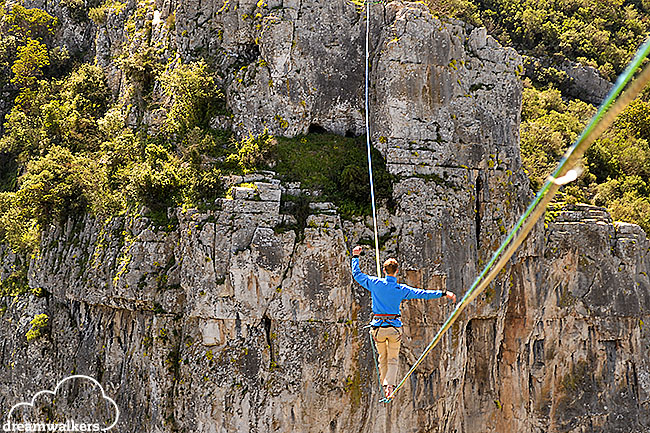 The next day I wanted to try it with a bit more tension. I put one hangover on, and Nuri tensioned it as much as he could, while of course sitting in a really awkward position. With about 8-10m of sag left, I went on the line. I stood up, went in to a surf, catch. Repeat. And again. I got frustrated. I decided just to push through (is what you always should do). I stood up and walked the first 40m. It was ok, the next part should be a lot easier now. I stood up and walked the rest of the line without catches. It was quite the fight, but it felt good! Time to try for the return send. A few catches with not more than 2 steps. I closed my eyes and focused. Don’t get angry, don’t get angry, just focus, I repeatedly told myself. I stood up, and walked the first 50 meters. I took a misstep and fell. I got really angry, but said to myself “then walk it with just 1 catch”. It didn’t work and I walked the rest of the line with about 3 catches. I got mad (as usual) and pushed too hard. When I got to the end I forced out a smile and looked at the camera. You know, because the team shirt is that cool.

And here’s my forced smile: 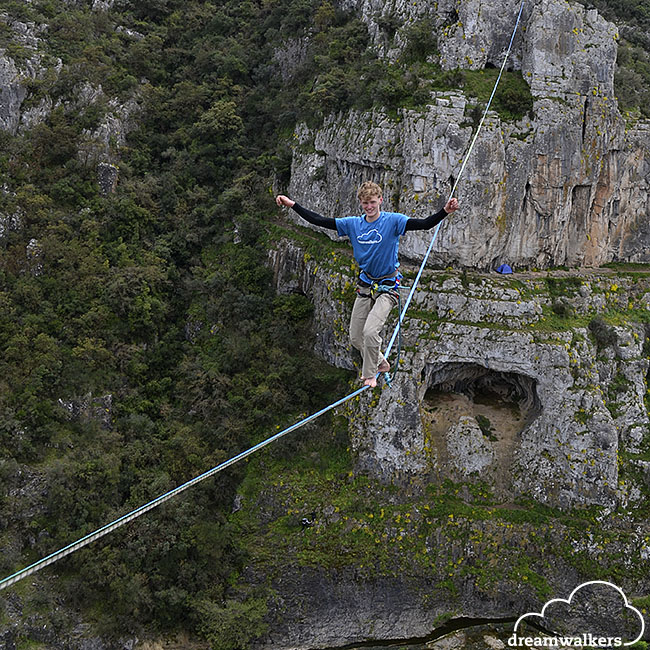 I got off the line, and they congratulated me. I didn’t accept it because I didn’t send it. Then they said, “but you got across with one catch!”. One catch? Oh yeah, one catch. I got so obsessed with sending it on the way back, that I totally forgot that the way there was just with one catch. I cheered up a bit, and was thinking about going again. Unfortunately I was way too drained for another good try, so I slid to the middle of the line, and bounced the living shit out of it 🙂

That morning just before we went up the cliff, the waiter of the camping restaurant gave us a huge banner, and he politely asked us if we could maybe hang this on the highline for a quick picture. Of course, the Dutchie that I am, I asked: “in exchange for?”. About this he was kind of vague, and said something like “free beer or dinner or something”. To derig the line, Nuri had to get to the other side, so he took the banner with him, we made a cool picture, and derigged the line. With the huge profits we could afford a couple beers and food, a delicious sell out 😛 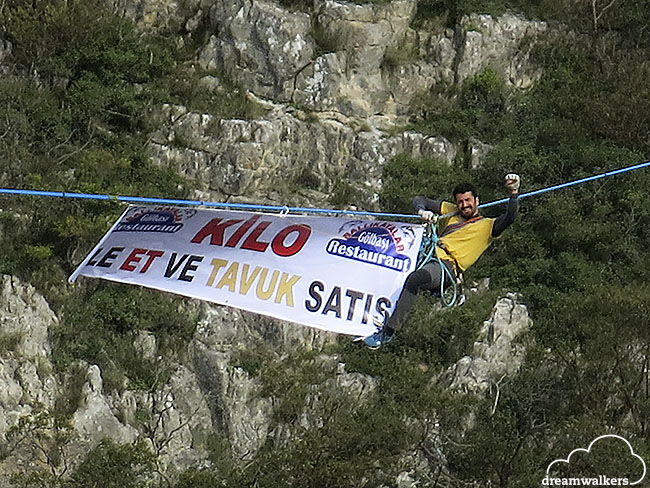