Some good friends of ours from Germany, Basti Aldehoff and Claas Lendt invited us help present a highline show at a cultural night in the Ruhr Area, Germany. The night was called “Extraschicht, Die Nacht der Indrustriekultur” (The Night of Industrial Culture). The Ruhr is former Germany’s biggest industrial environment, but almost all industry is closed now.   nWe were informed that the highline was planned between a 23m high cooling tower and the roof of an old hall – 65-70m long. When we saw the first pictures, we were immediately stoked! Unfortunately Yuri and David couldn’t make the event, so Tom and I travelled to represent the Dreamwalkers in Germany nnSo far my personal best on highlines was about 55m long. However, we had just received the brand new Marathon webbing from Slacktivity, a lightweight, low stretch, easy walking webbing. So this gave me huge confidence to at least make a crossing! nWe went there 5 days in advance to rig the line early enough for the show. Rigging on the cooling tower was quite a challenge, as we couldn’t easily access the rigging point. We had to throw some ropes attached to shackles over the top, attach them to the other side of the tower and climb up. Luckily the cooling tower had good, solid anchors. There was one metal beam that went all the way through the tower and so we attached slings to this beam on the inner and outer side of the cooling tower. Thus, the forces would be equalized and the weblock would remain perfectly in place.

The other side was easy, metal beams everywhere on the roof! However, the walkway to the access point was quite scary, as due to all the rusty metal. They were safe enough, organizer Klaus Borkens, told us. So we just took care walking there… nnThe highline only took about 4-5 hours to rig. Tom, Basti and I all had a short attempt before we left for the day. The line felt comfortable and relaxed. The view towards the cooling tower was great :-)! I was looking forward to session and really play around on the linennThe day before the show we returned to have some much better attempts. Tom was super controlled on the line and went for the fullman. For me the line was still quite a challenge. Sometimes I was able to walk 30m and then suddenly I lost my focus and I had to make a catch. Things were working out, but I didn’t have a full crossing under my belt yet!nnWe were able to stay at the Hahn Family as they lived close to the Jahrhunderthalle in Bochum. Thanks again for the great hospitality :) nnThe following day we arrived early at 11:00 in the morning. Well, it is early when the show begins at 18:00 ;-). So we still had some practice time on the line before we needed to perform. During one of my attempts I finally managed to the line with only two catches!nI felt great, because it took me almost 2 years to walk and control lines longer than 50m. Especially in the year when I finished my studies (and had no time to train) this caused some disappointments. 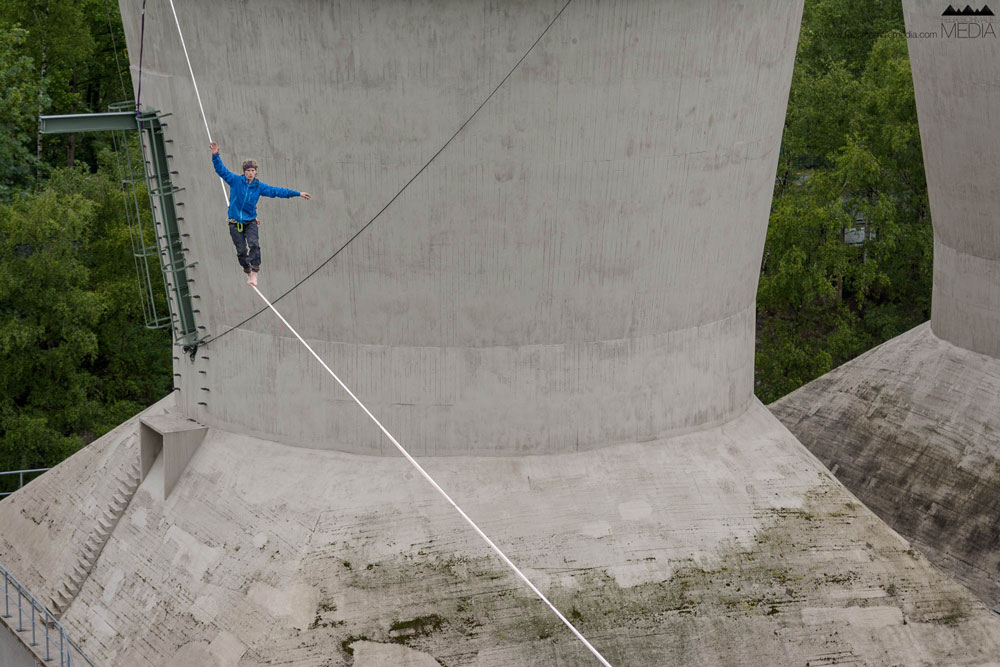 18:00. Showtime! We gave 3 Jumpline shows and 3 Highline shows, performing until 23:30. A looong 5 hour demo night! The combination of first Highlining, then immediately running down for a Jumpline show was quite exhausting, but also funny. Highlining with an audience still causes a bit of pressure (even after Holland’s got Talent), but Jumplining on super nice raggae sounds (Ranking dread) only caused some massive jamming! Tom and I aren’t the best trickliners out there, but we definitely know how to give a show and get the audience involved!nThe shows were really nice to do; we even experimented with a rodeoline underneath the highline. Tom did some real nice exposures and I had some good attempts and started to become comfortable. At 23:00 we had our last Jumpline show, before we went for a highline session in the dark. You think highlining is already difficult? Try it when you can’t see ANYTHING!nJust seconds before the show I saw these aerial silks (from another performance) hanging 5m from the jumpline. I saw a new option right away. I took the end of the silks to the Jumpline and my plan was to make a huge jump on the jumpline, hold the silks, make a big swing and jump back onto the Jumpline. But… the moment that I stood up, a BIG pain burst shot through my knee. I immediately knew, this isn’t good. And my evening was over 🙁 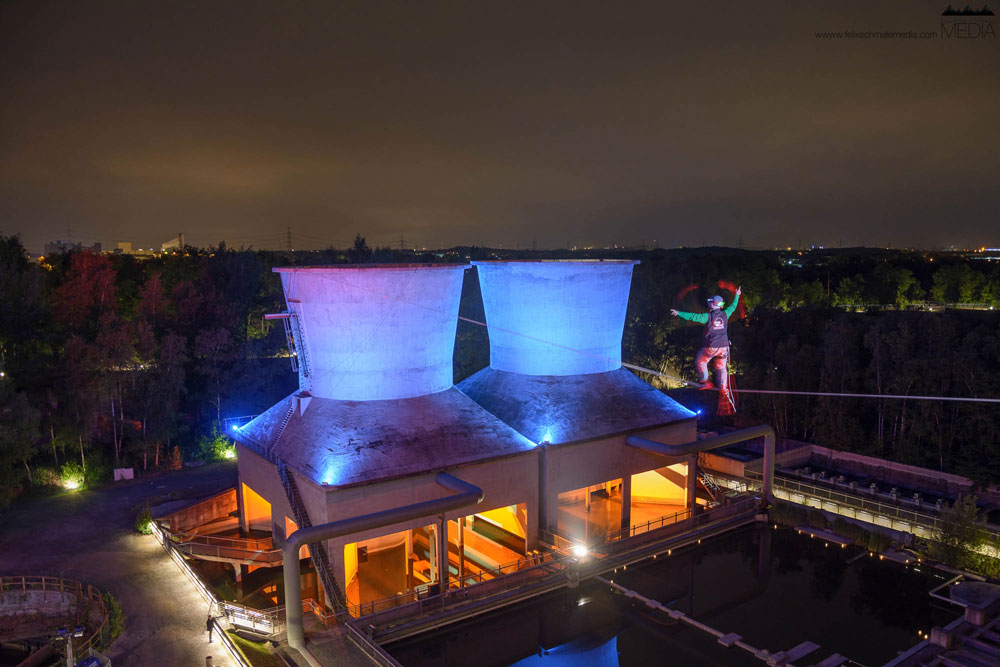 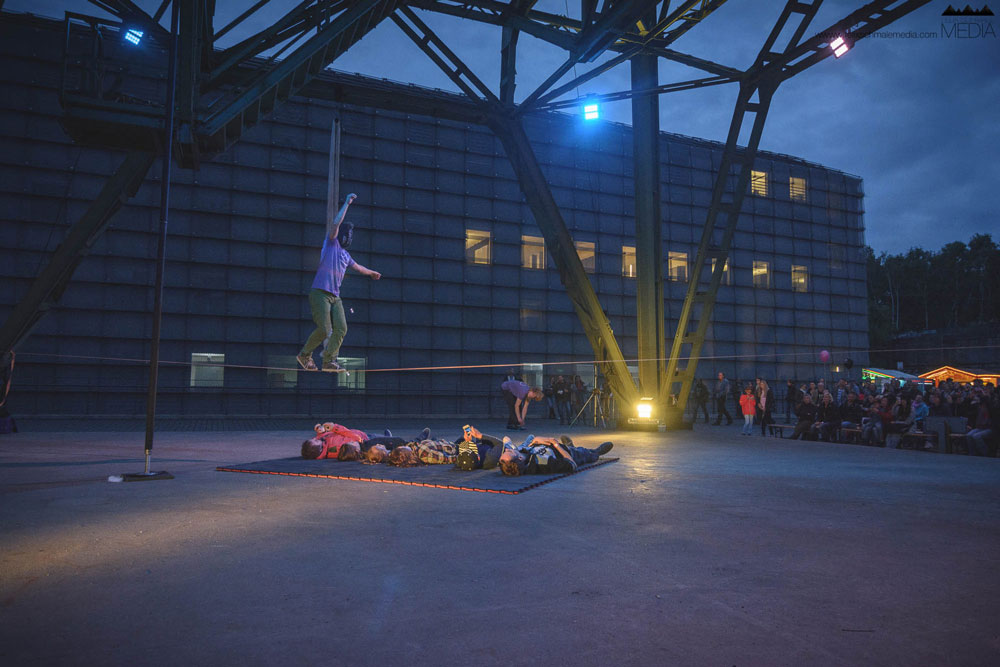 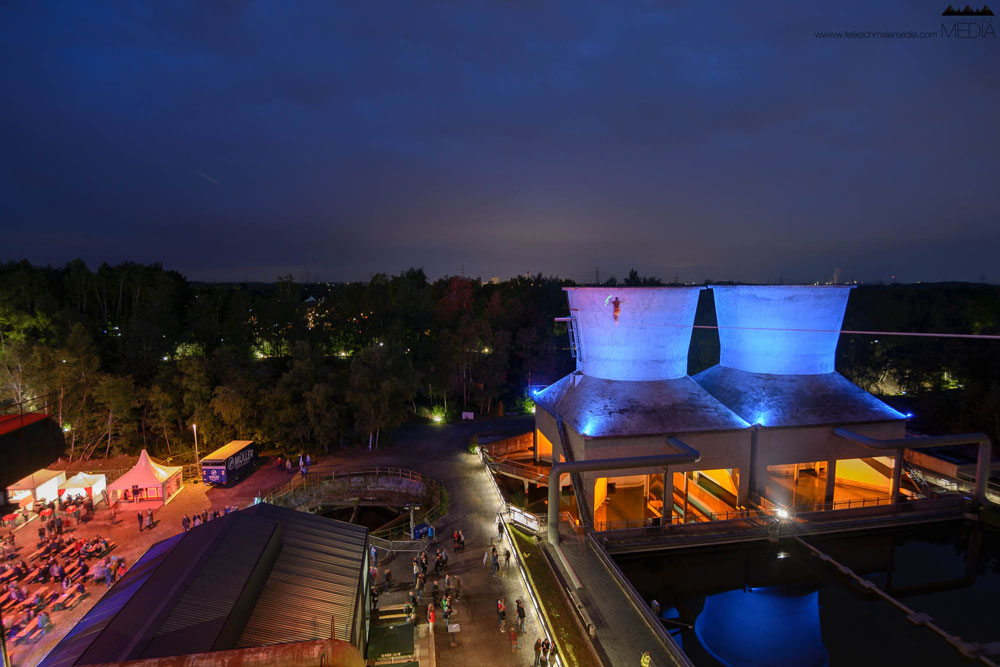 Rigging with Jonas and Basti was a fun, but time consuming process that got us all incredibly dirty from being in the old cooling tower. The line itself felt really nice and comfortable. It was also cool to test a new webbing in such a nice setting for the first time! The shows all went well, and I was able to walk the line every time I wanted to with some exposures and bounces during the walk. The transition from highline to trickline and back, 2 times per hour, seemed tough at first. After the relaxed reggae sounds from the first jumpline show, we managed to stay in that vibe for the rest of the night.   Derigging the line however was a completely different story for me, and honestly the most scary experience I’ve ever had. Since the cooling tower was incredibly hard to access, the plan was for me to leash in, slide to the cooling tower with a rope, derig the line and rappel down. Before sliding over, everybody was in place and we went through the plan again. Two minutes later I sat down on the cooling tower, which was about 50 centimeters wide at the rim. My left leg was hanging inside the cooling tower, and my right leg on the outside, with about 20 meters below me. So far so good, and I gave Jonas the sign to detension the highline. At this point, I still had not seen the massive thunderstorm coming from behind.nnOut of nowhere, a strong gust of wind knocked me down with my chest against the rim of the cooling tower. When I got up and tried to look what happened, I couldn’t see anything around me. One second later, I saw a lightning bolt striking down not too far away from me, and I realised I was in big trouble. The rim of the cooling tower was the highest point around, and I was sitting right on top of it with no fast way to get off. Sliding back was no option, as the line was already detensioned. Already completely soaked, I concluded that staying on the cooling tower to wait out the storm was not an option, and I had to get down as soon as possible. Building a rappel from the rope in my backpack was the best option. However, I could not even see my hands and I was laying down on the rim to shelter myself from the rain and thunder. There were still lightning strikes everywhere around me. I managed to get the rope out my backpack, tie an eight to a shackle, throw the coil down and clip in with my eddy. During this whole process, I could not see what I was doing. The circumstances were everything but ideal to rig something which my life was depending on. Being super exposed in the middle of a thunderstorm, every second was counting, and I made sure I was not spending any unnecessary time on top of the cooling tower. Another quick double-check using only my hands, and I decided everything felt right. I never rappelled down so fast in my life. nnFeeling solid ground beneath my feet has never been so good. I ran inside to hide from the rain. As soon as I was in a dry space, I just laid down and was unable to speak or react for quite a while. Even though the whole sequence described above only took 1 or 2 minutes, it drained me of all my physical and mental energy. My friends still had no idea what happened, and were relieved to find me down safely. nnWhen rigging and derigging highlines, I try to be as safe as possible and make sure my friends and I are at all times clipped in to a rope. Sometimes, you cannot control all the factors. What you can do, is take all factors into account and plan and prepare accordingly. In this case, we failed to properly assess the weather before going out to a potentially dangerous place. Luckily, it ended well but it was a scary lesson to be learned!